GOING BACK TO WHERE YOU CAME FROM

I've been more grateful than usual lately for anything that's taken me away from the world of Boris, Trump and impending doom. It's been a dreary patch, what with holidays cancelled, Gloom being hospitalised, and the current novel progressing more slowly than a DUP policy on climate change - never mind the various sequels and short stories lying around unfinished. There are days when I feel like burning the lot. Not Gloom, obviously: his return home, one kidney lighter but remarkably upbeat, was one of the more cheering events of the last weeks. 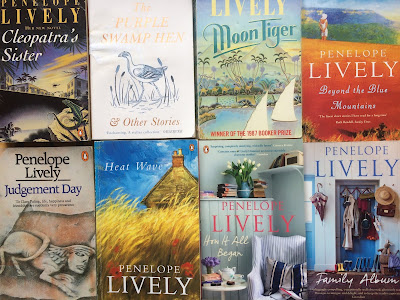 So thanks to Penelope Lively, yet again. Heat Wave was written in 1996 but for some reason I'd never read it, I can't think why. If I was going to take one woman's books with me to a desert island, they'd probably be hers. (And that would include her wonderfully funny children's book about a poltergeist, The Ghost of Thomas Kempe.) Moon Tiger is my all-time favourite, but I love all her work for the sheer beauty of the writing - even when she's talking about the weather. In a Lively novel it doesn't cloud over, instead:
'A grey pall has come tilting up from behind the hill, intensifying the green of fields and trees and hedges. The landscape is vivid. And the first drops of rain begin to fall.'

Wimbledon was another distraction. It's one of the few sporting events I like, although  I'd be happier if there were more Federers and fewer Smasher-Grunts around. Roger (who has a South African mother, by the by) was beaten in the end by Novak Djokovic the Serb, but I like him too, and it was a great match. There have been a few beautiful new players this year - notably the glorious American Coco Gauff - and Simona Halep (Roumanian) who took the women's title from Serena Williams, is a delight, both on court and off.

We also went to see 3 movies in 7 days. (QFT is the perfect venue for a recuperating pensioner nursing a 9 inch curved scar that looks like a shark bite.) Sometimes, Always, Never was a poignant, off-beat, Bill Nighy vehicle that appealed to us both (it was filmed in Lancashire, where Professor Gloom grew up) and Kind Hearts and Coronets is still blackly brilliant after 70 years. Our third film, The Gardens of Piet Oudolf, was a documentary about the garden designs of Dutchman Oudolf. It was like watching a stream of beautiful, restful, abstract paintings interspersed with trenchant Dutch observations. Lovely.


One thing Oudolf said - about non-indigenous plants: 'Why not use them, if they behave?' - struck a chord with me. I'm not indigenous: I was born a South African and spent more than half my life in South Africa and Zimbabwe, but my roots are now firmly in Northern Irish soil. I write about all these places, and although I can't claim to be a Northern Irish writer (which is an interesting condition in itself) this is now my home. Luckily for me, no-one has yet told me to go back where I came from, (no doubt because I'm white) but if the hideous Trump has started using the expression, perhaps someone should remind him that his own forebears came from Germany and his wife is Slovene-born.

The whole question of identity is a minefield: so many people these days are displaced - born on one continent, raised on another; blown from country to country on the winds of war, work, necessity, choice - but in the end your nationality, ethnicity, age, sex or creed shouldn't matter. You either contribute what you can to society, or you don't, and we are all members of the human race - apart from Roger Federer, obviously, who is a God.

And the only country we will all wash up in in the end (if we're lucky) is the Country of the Old, although for the time being I'm pretending not to be here.