A GLIMMER OF HOPE


We should have spent Easter in South Africa, with the children and grandchildren in a luxury game park (I'm talking tented accommodation with sunken baths and air conditioning here) followed by Orthodox Easter with family, friends and glorious Greek food, and after that a spectacular train trip down to Cape Town - instead of which, illness struck and our plans were scuppered. Still, as someone pointed out, at least we no longer had to worry about being eaten by lions. And there were other compensations (friends, family, chocolate) and best of all we were here to cheer on Alliance in general and Councillor Kate in particular as they won an unprecedented 53 Council seats in the local elections. Also, now that global warming is kicking in, instead of April showers and spring gales we had days of sunshine.

But April was a cruel month: journalist Lyra McKee shot dead; Mozambique, still reeling, hit by a second cyclone; Notre Dame charred and broken; floods in Zimbabwe and South Africa; Easter celebrants in Sri Lanka blown to bits; the latest dire warnings about the future of our planet...and here's something to put you off your dinner: if human children were given the same growth hormones used on chickens, they'd weigh 26 stone by the time they were 3 years old. If that doesn't stop you buying non organic/free-range, nothing will.

The other statistic that caught my eye recently was from the most recent Royal Literary Society report, which states that the average writer's yearly income has fallen from £18,000 in 2005 to £10,500 in 2018. (I have personal proof of this: my last quarterly royalties statement from one of my two publishers was 54p. If I depended on my writing to pay the bills, I'd be living in a cardboard box down by the Lagan, never mind planning holidays in South Africa.) I'm amazed so many keep going. It's a terrible job really - solitary, largely unpaid, fraught with rejection, and even when you do manage to get something published, the chances are high these days that someone will take offence at what you've written. The things you may or may not write about these days, depending on your class, gender, race, etc, are bizarre. Come on guys, Wind in the Willows wasn't written by a mole or a rat, but it's still worth reading!

Anyway, I've conducted a survey into what other writers do when the going gets tough and despair sets in. Some people scrub their kitchen floors or tidy cupboards; many of us go walking (which is cheap and healthy) and Kelly McCaughrain gardens - and makes plum gin for her friends. (I think more of you should do this.) I do jigsaws and play Scrabble. And it pains me to report that even here you're not safe from the censorious. I play online with my sister in Cape Town, and we are fiendishly competitive. So when she made a world-beating, 7-letter, triple-word score, I responded - in the private comment space, with 'Holy f...!' This was instantly translated into 'Hm, I don't think we'll send that word...' Censored on Scrabble, would you believe it? Well, all I can say is 'Holy ....' 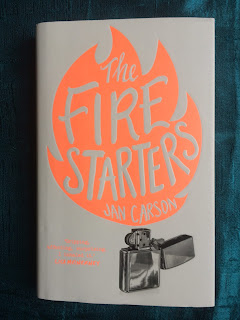 Of course, the best way to cheer yourself up is to read a good book, and Jan Carson's new novel 'The Fire Starters' is extremely funny and very good. She has a wicked unflinching eye and writes wonderfully to boot - an apt phrase, now that I think of it, for someone who describes the people of East Belfast as being 'particularly fond of football because it is a game of two sides and involves kicking'. And I don't think I liked this book so much just because I've been here so long that I no longer feel like a blow-in -  even if you knew or cared nothing for this city and its past, I don't see how you could fail to be moved and beguiled by the writing.

I'm also indebted to the friend who sent me an article from last month's London Review of Books: Diana Stone's 'Nightmares in Harare'. Beautiful, heartbreaking, writing, and a timely reminder that there is always someone, somewhere, whose troubles are infinitely worse than yours. But we all have to keep going somehow, to remember that things do change, and believe that they will change again, even here. And last weekend they did, and brought us all a glimmer of hope for the future.
Posted by Helen Nicholl at 07:33