I went to QFT to see 'Marianne and Leonard: Words of Love' yesterday, along with a horde of excited pensioners, and Councillor Kate. (Susceptible elderly persons revisiting the scenes of their youth should always be accompanied by a responsible adult.) 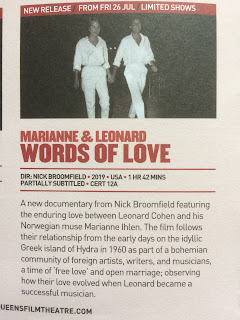 Back in the day, I fell in love time and time again to the background music of Leonard Cohen. I can't remember the men, but I remember every word of the songs - so there you have it, friends: Leonard lasts longer than love.

And what songs they are: So Long Marianne, Halleluja, Bird on the Wire... The first one I heard was Suzanne, and I heard it up at the top of a tall, thin, canal-side house in Amsterdam, in the laid-back, smokey atmosphere so redolent of the time. (Note to my children: please don't bother telling me I shouldn't mention things like that because the grandchildren might read them. It was 1970, for crying in a bucket, and even Aunt Emmeline had smoked a joint by then.) 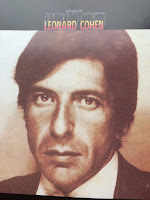 But to get back to Marianne and Leonard. By all accounts she was a lovely, generous woman and I'm glad they put her name first because she spent a lot of her life playing second fiddle to everyone else. It's a sad truth that women have been falling in love with charismatic, tortured geniuses since time began, only realising too late that what they're mostly tortured about is the idea of commitment. And Leonard Cohen was certainly a man who liked to have his cake and eat it. His songs are in a class of their own - and he did send a beautiful message to  her when she lay dying - but if I could turn back the clock and give Marianne Ihlen the happiness she deserved, and save her son from his own damaged destiny, I have to say I'd count Cohen's music well lost. Anyway, it's a fascinating documentary about a hedonistic and self-indulgent time - and one that should send a cold trickle down the spine of anyone who survived.