Councillor Kate rings us every morning to check we're still alive. Prof Gloom's favourite thing is to get to the phone first and put on his recorded message voice: 'You have reached the Dufton residence. To ascertain if either of us is dead, please press 1...' She used to get quite cross but now she's resigned to our cheerful morbidity. She even mentioned to an official at the crematorium the other day my own wish to be pushed out onto Belfast Lough on a flaming pyre, but he seemed to think there might be a problem with the regulations. My other idea (involving a large display cabinet and a taxidermist) wasn't well-received either. I can't think why: the English philosopher Jeremy Bentham has been sitting around decoratively at UCL for many years. But the man at the crematorium did say I could have my ashes fired from a canon or attached to a firework. I am now torn between this and being made into a paperweight or piece of jewellery.

George Saunders' brilliant novel 'Lincoln in the Bardo' is entirely set in a Georgetown cemetery, where a motley company of ghosts bear witness to Abraham Lincoln mourning his young son. It is witty, macabre and profoundly human - my favourite book of the year. I've also just finished reading Maggie O'Farrell's 'This Must Be The Place' - why have I not read her before? And why did I know so little about Ruth Bader Ginsburg until I went to see RBG, the documentary about her life? This quiet, courteous, infinitely steely US Supreme Court justice has spent most of her legal life fighting for women's rights, and, now in her eighties, is still fighting. 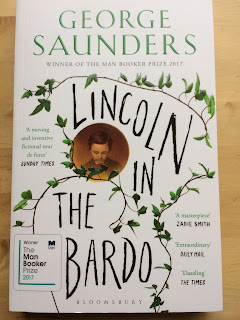 It's a good thing there are these antidotes to the prevailing gloom and doom, because life often feels like a party that's gone on too long: good fun to start with but less appealing as everyone around you gets drunker. Not that I'd blame anyone for drinking themselves into oblivion: the news is so hideous, it frequently seems like the trailer for a disaster movie, or a particularly nasty reality TV programme. A bizarre mish-mash of shock, horror and impending doom, all mixed up with celebrity scandal, political skulduggery, sporting melt-downs and - the bane of my life - Public Opinion. (And here we have Sadie Sanction who witnessed last Tuesday's tragic events: 'Yes, I saw it all with my own eyes, so I did. She just reversed into the driveway and smashed straight into him. She didn't even stop, just drove off as fast as she could. The whole community is devastated. He was just the loveliest wee garden gnome...')

The other thing I find strangely cheering (although I know this won't be to everyone's taste) is reading about impending cataclysms. I'm indebted to Kelly McCaughrain for directing me to a New Yorker article about the Cascadia subduction zone. No, I bet you didn't know about it either. It's even more terrifying than California's San Andreas fault, and like that one, it's not a question of whether there'll be a giant earthquake one of these days, but when. (Scientists estimate 13000 dead, 27000 injured and a million displaced in the next major rupture.) Add to that the fact that a large chunk of La Palma is scheduled to collapse into the sea one day, sending tsunamis racing across the ocean to drown the east coast of America - and imagine if both these events happened at once! - and it does make worrying about Brexit, Trump and global warming seem a little pointless.

The Cascadia subduction zone was only recently discovered. So who's to say there isn't a major fault-line lurking somewhere under County Down, just waiting to blow us all to kingdom come? If nothing else, it would definitely beat flaming pyres and fireworks for providing a dramatic exit.

Email ThisBlogThis!Share to TwitterShare to FacebookShare to Pinterest
Labels: Cascadia subduction zone, George Saunders, Lincoln in the Bardo, Maggie O'Farrell, RBG, San Andreas fault, This Must Be The Place'