A TALE OF TWO PUZZLES


On Christmas morning Professor Gloom found a 1000-piece jigsaw puzzle in his stocking. It was called The Reading Room and featured a lot of books and, appropriately, a telescope. I got one too: The Fantasy Bookshop.

I usually limit myself to doing jigsaws while I'm talking on the phone, waiting for food to cook, or listening to something on the radio, and I like to do them downstairs on the dining-room table. But Gloom got to the table first this time, so I decided to do mine upstairs, in my study. Big mistake: every time I went up to my desk to work I ended up doing the puzzle instead.

But there was another problem - almost immediately an unfortunate element of competition crept in: who was going to finish theirs first? We pretended there wasn't a race going on at all, but of course we were both hell-bent on winning. So someone would casually remark that they were going to work on their novel/ paper/ Greek revision - and then sneak off to their jigsaw. Words were exchanged and feelings ran high, there was even an accusation made that someone had UNDONE a bit of the other's in the middle of the night...

Modesty forbids that I say who won but I don't think we'll be doing any more for a while, not at the same time anyway. We won't be eating any turkey either. Professor Gloom won our Christmas turkey at golf. I don't even like the things - give me a goose or a duck any day - and this one weighed in at almost 9kg. (And given the secrecy surrounding its collection - at the dead of night, from the back of white van in a carpark - I strongly suspect it fell off the back of a lorry.) With 500g of butter under the skin and stuffed with onions, garlic and lemons, it wasn't too bad, but there's still an awful lot of it in the freezer, so if anyone missed out on turkey this year, you know where to come.

In between the eating, drinking, puzzle-mania and old movies on TV, I managed to read a few books. 'Crooked Heart' by Lissa Evans had been recommended on Radio 4's 'A Good Read' and turned out to be a funny, touching story about an orphaned war-time evacuee and his profitable (and criminal) business partnership with a crooked foster-mother. 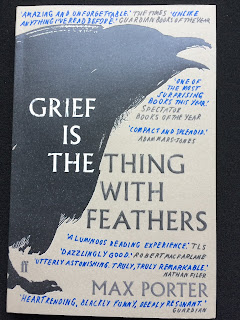 Before that I read 'Grief Is The Thing With Feathers'. I had to read it quickly because it was intended as Kelly McCaughrain's Christmas present but luckily it's a slim book, a beautiful, haunting - and funny - poem to loss, partly related by Crow, who will stick in your mind forever. I also bought Myra Zepf's wonderful picture book 'Don't Go To School!' for the various grandchildren. (It's the first of her books to be translated into English; the others are all in Irish.) 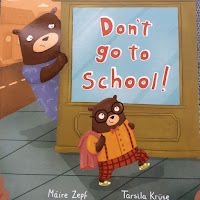 My own Christmas presents included Stephen Fry's 'Heroes' - a witty re-telling of the stories of the likes of Theseus and Jason - and  Madeline Miller's 'Circe'. (I'd bought this one some months earlier: what I do is I buy presents throughout the year, and give them to Professor Gloom to hide until Christmas. I'm so old now that by the time I open them - assuming he remembers where he put them - I've forgotten all about them, so he doesn't have to rack his brains about what to buy me and I get delightful surprises that I actually want. A win-win situation.)

Anyway, I greatly enjoyed 'Circe'. Even before my son had the good sense to marry a Greek wife, I was in love with all things Greek. I soaked up mythology as a child - I even had a cat called Circe. In Miller's book she's a remarkably honourable immortal, and well-disposed towards humans - apart from the ones she turns into pigs. But the rest of the gods are an absolute shower: arrogant, touchy, dangerous, and continually at each other's throats. I was frequently reminded of our politicians... and I'm not sure a bunch of Greek gods wouldn't do a better job.

And now I see Jan Carson is compiling a fantasy literary government. This could turn into a good game. I'm still working on my own list but it will probably include Mary Poppins and Gandalf. And possibly Charlotte the spider from Charlotte's Webb - a creature of infinite patience and attention to detail. Which is exactly what you need for jigsaw puzzles.