THE TALE OF A FIERCE BAD GRANNY

Omar Patrick has gone home to London, leaving few visible traces behind. Unlike his older cousins he's not yet big enough to bury vital household objects in flower-pots or post them through the cat-flaps, and there are no grubby hand-prints on the windows, or gnawed rusks down the sides of sofas. The only real sign that he was here are the piles of picture books lying everywhere. And that’s one of the great joys of having a new baby around: you can dig out and enjoy all the old favourites and discover brilliant new ones.

I haven't always been a good influence as a granny: I sometimes forget to mind my language and I like to raise the occasional bit of toddler mayhem. It follows that I love picture books that are wildly funny, imaginative and a bit subversive. You can keep the ones about caring and sharing, the thinly-disguised sermons on political correctness, and the deeply gloomy ones about saying goodbye to Gertie the Goldfish. Life’s hard enough, for god’s sake; children need cheering up, like the rest of us. 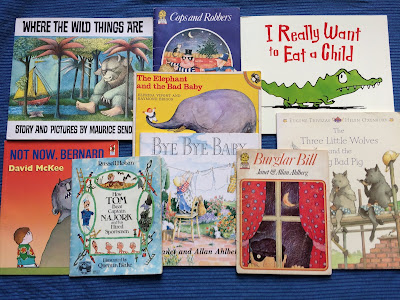 Burglar Bill, The Elephant and the Bad Baby, The Three Little Wolves and the Big Bad Pig, How Tom Beat Captain Najork and His Hired Sportsmen – these are just a few old favourites, and now I have two new ones: I Really Want To Eat A Child, and The Little Mole Who Knew It Was None Of His Business. As so often happens, it turns out everyone knew about this last one, except me, but it’s the ultimate book about poo. I’m also very taken with the Wonky Donkey as read on U-tube by that wonderful Scottish granny.

Occasionally the recipients of my well-intentioned gifts have been traumatised – Bye-bye Baby reduced a great-nephew to tears: I still feel guilty – but by and large the little hellions have shrieked with laughter and demanded more. And some have the excellent sense to refuse to listen to anything remotely improving. When my granddaughter was given a picture book of bible stories she listened to her father reading for 30 seconds before she took the book firmly from his hands and said, I’ll read this one. The new, improved version began ‘Once upon a time there was a princess…’ 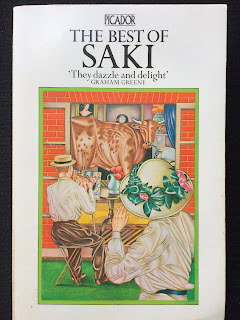 And I don’t know if anyone reads Saki any more, but he wrote a wonderful story (The Storyteller) about a  bachelor entertaining fractious children on a train with the tale of a little girl who was so good that she won endless medals for good behaviour. Then, covered in clanking medals, she was allowed the rare honour of walking in the King’s garden where there were ornamental pigs - and a passing hungry wolf. Alerted to the presence of the child (by the clanking) the wolf catches her and gobbles her up. The accompanying aunt in the story is outraged, but the children are delighted that it’s the good little girl who has been gobbled up rather than one of the pigs. And this is the thing: children like a bit of anarchy, and they love to be entertained. But there's been a move lately – even in picture books but particularly in middle grade and young adult books – towards stories that are so worthy, so weighted towards the socially-meaningful and politically-correct, so afraid of giving any conceivable offence, that a lot of them are deeply dreary. Come on people, in this hideously alarming and unmanageable world, don’t we all need a little escapism?

Which brings me to one last thing: I’ve complained before about the emotional-blackmail of those Facebook posts that demand you share some stuff about cancer, pollution, puppy farms, whatever - or be exposed as the heartless, uncaring creature that you really are. Well, all I want to say is that when I die, sooner rather than later - of cancer, heart disease, liver-failure (or more likely a stroke caused by reading one more pronouncement by the cretinous Trump) – if any one of you uses it as an excuse to post something on Facebook urging others to prove that they too truly care about cancer, heart disease, stroke, etc, I will come back from the dead, so help me god, and strangle you with my own winding-sheet. Don’t say you haven’t been warned.