FIDDLING WHILE THE PLANET BURNS (plus a note from Clementina)

Pay attention please. If you, or anyone known to you, rides a bicycle, I’m telling you now that I’m going to buy a large horn or hooter - something very noisy anyway - and the next sodding cyclist who doesn’t use a bell and nearly knocks me off my elderly feet as they zoom past will get blasted from behind. And if he or she whips round, skids and falls off, well too bad. It’s usually a he, mind you – and please don’t bother writing in to say that picking on men is a hate crime now: so should flattening pensioners be.

Anyway, I’ve heard enough this week about hurting feelings and giving offence. You can do this in so many ways now, it’s hard to keep up, but you might not realise that asking parents the sex of a baby can be tricky because in some circles it’s considered offensive to label children before they’ve made up their own minds what they are. I think I need a drink. It’s ok to criticise Middle-Aged Drinkers, by the way - not that I care: I’m not a middle-aged drinker, I’m an old one. And at the moment I’m sick, and extra grumpy because I’ve had to miss second son-in-law’s big match in Omagh, to which second daughter and first and second husbands have gone (together).

Can you tell I’m reading Milkman? It’s extraordinary: hypnotic, forbidding, furious and funny. At times I can hardly bear to go on reading, but Anna Burns’s prose is like a current that drags you back down every time you come up for air. And this namelessness of the characters is very catching: maybe-boyfriend, second sister, first brother-in-law…I’ve calculated that Clementina is sixteenth-cat. It also makes a nice change from last week when I was reading ‘Eleanor Oliphant Is Completely Fine’ and started sounding even more pedantic than usual.

Milkman is just one of the pile of books I’ve bought as Christmas presents for friends and family, not that they’re likely to get them. At least not until I’ve read them myself. But I’m full of other good ideas, which I’m happy to share. In my personal crusade to curb Christmas excess and save the planet, I’m trying (yet again) to set an example to my family by putting a strict limit on expenditure. It really doesn’t take much to produce a delightfully inexpensive stocking full of surprises carefully tailored to the needs of the recipient. (Eleanor Oliphant is popping up again…) Spendthrift-daughter, for instance, will be receiving a money-saving stocking: I’ve already contributed a darning kit and several old candle stubs, husband has come up with a toothpaste-squeezer, and second son-in-law has suggested a magnifying-glass so that she can read her bank statements properly. All to be tastefully wrapped in old newspaper.

Brown paper is another answer to Christmas wrapping – and a small step in the direction of trying to do whatever we can to use recyclable material. I think we all know in our hearts that we’re hurtling to destruction: this might be why we spend so much time these days worrying about perceived offences and trivial complaints. Why we turn up the volume on our headphones and rush from one mindless distraction to another, shopping, texting, tweeting, shutting out the news of wars and droughts and famines, of seas choked with plastic. Fiddling while the planet burns. So expect your Christmas book wrapped in brown paper, and maybe don’t expect to get it until June.

(A Note From Clementina 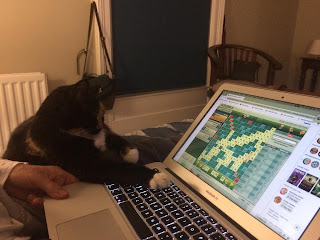 You may be surprised to read this but anyone who has seen the pictures of me playing Scrabble will know I’m no ordinary cat. Anyway, I’d just like to point out that a) I have been referred to as ‘sixteenth cat’ – I mean, what happened to all the others?! I feel seriously insecure - and b) all this stuff about inexpensive Christmas presents: I just happen to have seen the list she’s made for Professor Gloom. Gin, perfume, more books, chocolates…It’s enough to make a cat laugh. )