A WEDDING IN CLONES 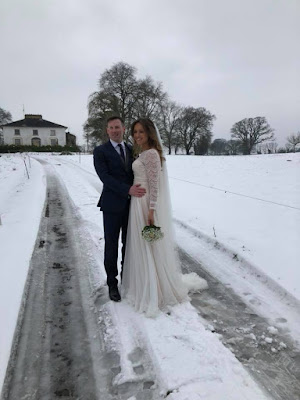 On Saturday 3 March Kate married Fergal in a little church in Clones, and even the unbelievers, the unobservant, and the deeply unsentimental (disproportionately present on the bride's side) were reduced to a quivering mush. Outside the snow (which had prevented quite a lot of people, including one of the two bridesmaids, from getting there at all) lay thick and white; inside, the congregation let out a collective sigh as the bride, attended by the one original bridesmaid, plus a heavily-pregnant sister (co-opted at the last minute) and a tiny, exquisite flower-girl, drifted down the aisle towards the groom. There was a fiddle, a flute, and a girl with one of those Irish singing voices that floats you up to the ceiling.

Which is probably enough of the wedding fervour. But what I will say is that I was never at a happier wedding, and the reception that followed at the Lough Erne resort was the best of all possible parties. Put any of our Irish, South African, Greek and Indian families in one room - not to mention the several other nationalities present - and you're bound to end up having a party, but this one was brilliant. Professor Gloom and I faded away before the dancing got properly going, but at a certain age there comes a point when a warm bed and a long sleep in the deep silence of the snowbound countryside trumps every other prospect.

Now it's 5 weeks since the wedding, and 4 since the last of the guests flew back home - after which Gloom and I lay down for 2 days with cold compresses on our heads. When we got up again, the house was eerily quiet. Apart from small hand-prints on the windows and a few plastic toys carefully buried in the houseplants, it was as though they'd never been here... 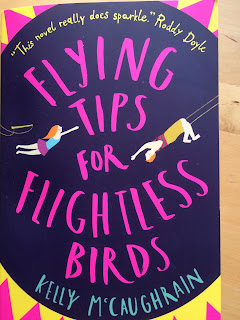 It's a good thing there was Kelly McCaughrain's book launch to cheer us up: I defy anyone not to be cheered by the Belfast Ukulele Jam - out in force to support one of their own -  and if you haven't read 'Flying Tips for Flightless Birds' yet, go and buy it NOW. You don't have to be a Young Adult to enjoy it; you can be a grumpy old person and still be seduced.

There was also lots of work waiting to distract us: scientific papers, novels at various stages of composition (or possibly decomposition) never mind the disordered house, disgruntled cat and neglected garden. And sadly, the endless, inescapable and polarising coverage of a local trial. Too many people have talked and written about this already, but I'm starting to think that hurling abuse via social media is the modern equivalent of putting people in the stocks. And that maybe actually throwing rotten vegetables and the contents of your chamber-pot is a bit braver than flinging dirt from the safety of your laptop.

So, what with one thing and another, we decided we needed another holiday, which is why we went back to Lough Erne. And what a good decision that was: the snow had gone, but the days were still sharp and bright as knives, and all that peace and space restored us. 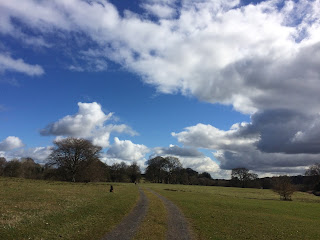 We ate, drank, walked, slept, explored the countryside and were wonderfully well looked after by the hotel staff. And we had plenty of time to read. I finished the - to me - surprisingly enjoyable 'Essex Serpent' then started on Tea Obreht's 'The Tiger's Wife' - which I'd been meaning to read for years and am glad that I finally did. The tiger of the title assumes strange supernatural powers, in the minds of the locals; Sarah Perry's novel features an ancient winged serpent supposedly lurking in the marshes. Which might be why, very early one morning, I was almost certain I saw a long, dark, coiling shape breaking the surface of Lough Erne... 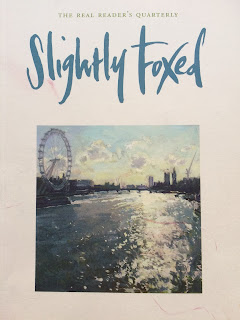 I also packed the most recent edition of Slightly Foxed. I love Slightly Foxed. It bills itself as the 'independent quarterly that introduces its readers to books that are no longer new and fashionable but have lasting appeal. A bit like myself, really.

Unfortunately, there's been a shameless amount of eating and drinking since Christmas, and in my case the wages of over-indulgence are gastritis, so I'm currently living on green tea and rice cakes, which is much the same as eating lightly-salted polystyrene. I even had to shun the Easter eggs. Still, the honeymooners came home on Easter Monday - Gloom was torn between joy at their return and disappointment that his vicarious travels had come to an end: he much prefers getting endless photos of foreign lands to all the bother of going there himself - and in May there'll be a new grandchild to look forward to. Plus, the days are getting longer, and I think I might have found a way forward, at long last, with the book that's been haunting me for months.

And one last reason to be cheerful: this weekend it's Greek Easter! I think I might treat myself to a little bit of chocolate, and  a glass or two of champagne. Not exactly what the doctor ordered, but what the hell: it's not how long you live that matters, but how well you live.