PANCAKES, PARTIES AND PASSING ON... 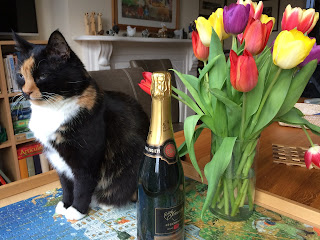 Pancake day yesterday. I had Ormeau pancakes with an inch of butter and lashings of maple syrup. It’s what I have for breakfast every day of my life but this is the one day my husband can’t mutter about my arteries. He has to watch his weight himself; lucky for me I come from a long line of women who get thinner and thinner as they grow older. We end up like little brittle stick people and have to be saved from going down the drain with the bath water.

Anyway, I need to eat to keep my strength up: it’s going to be a busy year. There’s Daughter 2’s wedding in March, Daughter 1’s baby due in May, and several major birthday celebrations, all accompanied by invasions of relatives. We’ve had two hen parties already; the first a family affair for a dozen or so - the second, last weekend, for twice as many. There were pre-party drinks at one venue, cocktail-making and dinner at another, and dancing and god knows what at a third. I wouldn’t know: Professor Gloom came and dragged me home, along with the other two older members of the party, before we had a chance to behave unsuitably.


I’ve been very rude about hen parties in my time – about weddings in general, really. I’ve been married twice in registry offices and I’ve always considered big weddings a tremendous waste of money. But I have to say, this was a classy hen. We didn’t just have Anna Lo, Naomi Long and the Lord Mayor there, we also had Claire and Helen, the Bridesmaids from Heaven, as well as various local stars of stage and public life, and – for one night only - the Lutalo Sisters. (In case you move in less exalted circles, or don’t know all of my extended family, they’re Uganda’s gift to the world, and for a combination of brains, beauty, and joie de vivre, will never be surpassed.)

Anyway, it was a good party. But hen nights are not for sissies, and certainly not for old ladies. And before anyone says ‘you’re not old’ let me tell you something: I’m sick to death of this 70-is-the-new-50 and you can’t be old until you’re 90 rubbish. 70 might be the new trying-to-be-50, but it’s been hard work getting this far, and now that my three score years and ten are nearly up, I’m going to be as old as I want. I’m going to eat, drink, wear and do whatever takes my fancy, and I’m never ever going to read another word of any book that hasn’t got my full attention by the time I get to page 3.

I don’t sit through films I’m not enjoying either, which is why I go to QFT. If you walk out of a movie there, you can sit in comfort in the foyer with a glass of wine, and wait for your friends who sat through the whole thing until they come out holding their heads. I went to see Phantom Thread last night. If the end had been at the beginning, I might not have lasted, but I liked the clothes, and both Daniel Day Lewis and Vicky Krieps (apt, that name, considering her character) were sufficiently watchable to keep me interested - and there’s a bit where she first prepares some mushrooms for him that probably sent a collective ripple of sympathetic glee through half the women in the audience – but in the end I have to say I thought it was a load of twaddle.

I’d like to see a few more films where younger men got involved with older women, just as I’d like to read a few more books written by, and for, older people. That’s the other thing about age-denial: if you’re not allowed to be old then you also miss out on the traditional benefits of deference, respect, and allowances made, or credit given, for a lifetime’s accumulated wisdom. (Ok, maybe not wisdom, but at least experience.) The end result is that most of my generation go around desperately trying to keep up, and terrified that their memory lapses and tendency to repeat themselves will be seen as signs of incipient dementia. My granny didn’t apologise for forgetting peoples' names or losing her keys. “Oh well,’ she’d say, ‘that’s what happens when you get old. Why don’t you pour us another little gin, dear?’

And while on this cheery subject, one last thought: Advance Decisions. This is the Advance Decision to Refuse Treatment should you lose the capacity to make decisions for yourself. This applies to all you younger people out there too: in fact, you’re far more likely to be kept alive with ventilators and feeding tubes after some catastrophic accident. I was spurred on by a Radio 4 programme about Polly Kitzinger, daughter of natural childbirth campaigner Sheila Kitzinger, who was kept alive after terrible brain injuries despite her family knowing it was the very last thing she would have wanted. Compassion In Dying have a free, simple and easy to download form: you just fill it in, sign it and get someone to witness your signature.

Myself, I’m hoping to keel over mid-G+T, after which I won’t mind what happens, although I’d like all my friends and family to have a party.  What I’d really like would be a send-off on a burning raft, pushed out into Belfast lough at night, but apparently that’s not permitted. Still, with any luck my Advance Decision will ensure that I die with as much grace, dignity and speed as possible, and without any unnecessary medical interference. And until then, I’m going to squeeze every last drop of enjoyment out of life that I can, starting with a celebratory dinner at my favourite restaurant tonight. 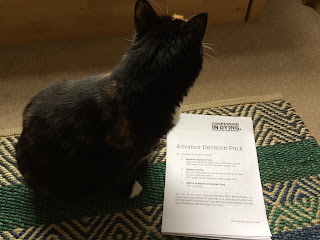 Happy Valentine’s Day everyone, and many more.

What! Who's going to open the cat food?