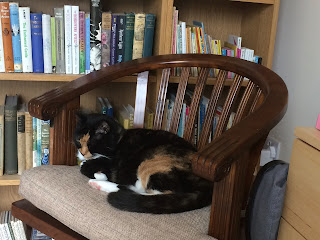 I started this blog in 2016. The first post was a response to Women Aloud, the newly-formed group promoting Northern Irish women writers; the last was inspired by the women I met on a Pro-Choice march. The 19 posts in between were mainly about books, writing, travel, life… There were low points - 48 hits for one - but Women Aloud got 341, the piece written after the Manchester Arena bombing got 363, and Right to Choose scored 1280 - which made me feel  readers had got their priorities right. And having made up my mind that it was the last one I was ever going to write, it was nice to bow out on a personal high.

One of my daughters refuses to have anything to do with social media (she still writes letters) but her younger sister has 2,500 followers on Twitter, and their brother has 24k. I think I’ve got around 50, so even I can see I haven’t got a hope in the social media stakes, although Professor Gloom wins the Low Profile title hands-down: he has 6, and I think one of them might be the cat. The problem is that blogging is addictive: I find I miss the fun of it too much not to start another, so in spite of everything I said, here I am back in the blogosphere, Losing the Plot Again…

One of the good things about blogging is it loosens up the writing muscles. It’s a sort of mental pilates, it keeps my brain ticking over, and it staves off the moment when I actually have to get back to the work in progress. It also lets me to say something about the often forgotten writers, books and people who've inspired me. (I could do another whole blog on who and what has depressed me lately, but there’s enough gloom out there already.)

So, this week I’m tipping my hat to a small group of women who meet once a month because they have a mutual passion for a lonely, undervalued and mostly unprofitable occupation: they write books for children. Children’s books are a growing market, but it’s harder than ever to get published, and good children’s books - books that delight, that fire the imagination, the ones you remember for the rest of your life – these are not so common. And a good writer teaches a child how to read, just as a good teacher opens a student’s eyes to the infinite possibilities of maths or music, or whatever.

One of the striking things about our group is that most of them write for Young Adults. I’m old enough to remember the days before YA; back then we had teenagers, who stayed in a dreary limbo until they reached 18 and were finally allowed to be Adults. It wasn’t much cop being a teenager: we had no social media, not much social life outside of school, and no-one was interested in our feelings, fashion or opinions - although we could at least get drunk and take our clothes off without anyone posting up the details for all the world to see. And because life was so devoid of other distractions, we had time to read. Apart from the classics deemed suitable for school, there wasn't a lot between Nancy Drew and Hercule Poirot, so thank god for I Capture the Castle and Catcher in the Rye. For Sci Fi: for John Wyndham and Ray Bradbury.

But now the world’s a harsher, brasher, faster place, and Young Adult-hood begins at 12, or so I'm told. I worry that childhood is shrinking, that our children are being bombarded from babyhood by the noise and racket of modern life. By constant visual imagery and the relentless pressure of social media; by the jostle and haste and din of everyone shouting to be heard.

So, to anyone trying to contribute to one of the few peaceful, solitary, affordable pleasures available to our children – to books that transport their readers to extraordinary worlds, that make them laugh, and think, and wonder – and sometimes just make their lives a little more bearable – well, all I can say is, what better thing could you be doing? 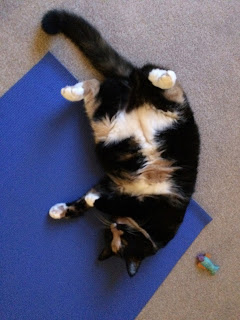 So, what are the books that I remember most from my own childhood? My father reading the Just-so Stories to my brother and me; my mother reading The Wind in the Willows. Pippi Longstocking, sent by my grandmother with an inscription reading ‘Helen dear, I hope you will like Pippi, but please don’t imitate her!’ George MacDonald’s Princess and the Goblin, borrowed from a tiny country library; Patricia Lynch: The Turfcutter’s Donkey; The Borrowers; all the E Nesbitts brought to me by a family friend during a long illness; C.S.Lewis, Tolkien, Rosemary Sutcliffe…just writing down their names is as comforting as being tucked back into my childhood bed.

And why is there a picture of Clementina at the top of this? I’ll tell you why: every time I post anything with a picture of a cat, I get twice as much interest as before…and if I flatter her enough, who knows? She might even start following me on Twitter.