FROM KILLICK-CLAW TO KALAMATA AND BEYOND... 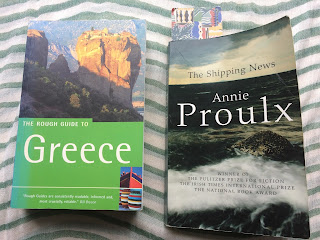 I started The Shipping News twice, and each time gave up. Quoyle was such a hulk of misery, I didn’t want to know what happened to him, and the chopped-off prose style grated on my ear. (I never got over Mrs MacBeth telling me my own prose had a fine, poetic quality and consequently lean towards the lyrical.) Well, third time lucky, and a heartfelt vote of thanks to Councillor Kate’s reading group who chose it as one of their books.

This is a group who read novels or non-fiction about far-off places they don’t have time to actually visit. Or possibly don’t want to: no harm to Newfoundland but it sounds like somewhere I’d pay a lot to avoid. But The Shipping News sings, and once your ear is attuned, you are hooked as surely as one of those cod whose cheeks are forever stewing in the Tickle Motel.

Annie Proulx brings her characters and landscape to spare, beautiful life. A man leans in a doorframe, ‘hands draining into his pockets’ and ‘…the fiords, thousand-foot cliffs over creamy water. The same birds still flew from them like signal flares, razored the air with their cries…’ The names: Petal Bear, Nutbeam, Wavey Prowse...and shambling, spade-jawed Quoyle will steal your heart away.

I don’t know how The Shipping News ends because I haven’t finished it, and don’t quite want to, so I’m taking it with me on holiday. I’m off to Greece on Thursday for the christening of the youngest grandchild. My daughter-in-law’s family comes from a place in the hills above Kalamata, and family celebrations involve the entire village as well as the travelling circus of close friends and family that accompanies my son wherever he goes. Professor Gloom has remarked more than once that he feels as though he’s married into the Mafia, but is, I know, secretly looking forward to a bacchanalian week of eating, drinking, dancing and general mayhem. 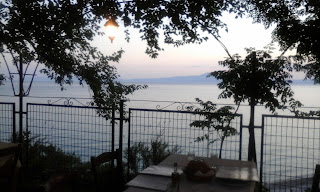 The only worry I have (apart from Clementina savaging the cat-sitter) is that the novel I recently finished writing has a central character who bears a faint resemblance to myself and who meets an unfortunate fate in Greece. I’m hoping Life won’t imitate Art, but, if I do come to a sticky end, well what the hell - it will be fabulous publicity.
Posted by Helen Nicholl at 04:00