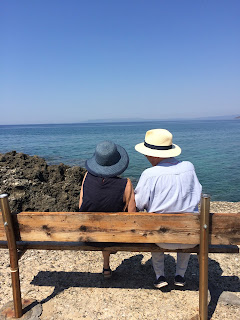 We arrived in Kalamata on July 6, just in time to celebrate the third birthday of granddaughter Erin Eleni - she of the exploding hair, whose every inch vibrates with energy, and whose smile melts stones.

Having recently killed off a character in Greece, I was hoping life wouldn’t emulate art, but luckily no fatal accident befell me. Instead I broke my wrist. This gave me the choice of finding a hospital and possibly spending the whole week in plaster (and out of the water) or strapping it up and relying on the glorious Ionian sea and copious quantities of wine to act as anaesthetics. I went for the second option and would do the same again, because to swim before sunrise in the bay of Kalamata, rocked and soothed by clear cool water – and again in the heat of the morning, and in the afternoon, restored by lunch (bread, wine, feta, olives) and a long lazy siesta – this is close to paradise. And when the sun sets, turning the sea to glass and the mountains pink, there is a little open-air restaurant above the bay where you can choose your fish from the day’s catch, to be grilled and served up with oregano-flecked potatoes and Greek salad, all washed down with carafes of cold white wine. 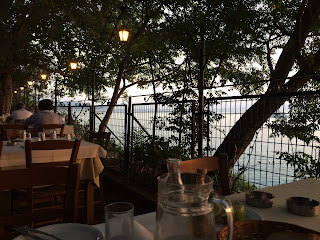 The main reason for being in Kalamata was to join the family circus that gathers for celebrations, in this instance the christening of Aiden Socrates, one year-old brother to Erin Eleni, who is so entirely delectable that if the fish and olives had run out, this grandmother might well have eaten him. If you have ever attended a Greek orthodox baptism you will know that it is a long, incense-soaked, tradition-laden ceremony, in this case in the little church in the village where Erin and Aiden’s other grandparents were born and raised, and where the entire community seems to be involved in any event.
The village is up in the hills. There is one street, and the taverna looks down over the sweep of ruins that is ancient Messene. It is a magical place, even without flowers, candles, music, and the stars burning overhead. Professor Gloom, as predicted, became exceedingly merry. In the end, the dancing, eating, drinking, and long intense conversations - no less warm and delightful for being largely incomprehensible - went on until damn near dawn. 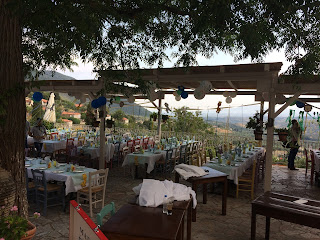 Two days later most of the party decamped to Kefalonia, but Gloom and I, along with Councillor Kate, went on a trip around the Mani. The Mani is famous for being wild and remote, and the Maniots for their feuds, their tower-houses, and their fierce independence. It also inspired Patrick Leigh Fermor to write his book about travelling around the southern Peloponnese. ‘Mani’ is a dense, beautifully-written mixture of travel, history, folk-lore and anecdote, by a man whose digressions are legendary. Who else, musing on strange communities, could mention in the space of a paragraph the Mevlevi dervishes of the Tower of Winds, the Chams of Thesprotia, the scattered Souliots of Roumeli, the wandering quacks of Eurytania, the Kravarite mendicants of Aetolia, and the phallus-wielding Bounariots of Tyrnavos?

Leigh-Fermor’s extraordinary account of his youthful journey, on foot, from the Hook of Holland to Constantinople can be found in the two volumes written decades later: ‘A Time of Gifts’ and ‘Between the Woods and the Water’. The third volume was never completed, but after his death Colin Thubron and Artemis Cooper put together ‘The Broken Road’ from the work he left behind.  I’d admired him as a writer for so long, and I was curious to see the place where he lived for so many years: Kardamyli, a little village down the coast from Kalamata. So we drove there first – or rather, we were driven by the peerless Dionisios Barounis, who has ferried us around on our last two trips to Greece. (We Transfer You taxi and mini van services – www.wetransferyou.gr -  if you find yourself in need of a cab in the Peloponnese, look no further.)

Kardamyli is lovely: small, peaceful and seductive. Then through Lakgada, where we stopped to look at frescoes in a tiny church, and north to Sparta which is famous but forgettable. Then up into the hills to our main objective, Mystras, a sprawling Byzantine complex of churches, palaces and courtyards, some in ruins, some restored, and all clinging to the precipitous slopes of Mount Taiyetos. We picked our way down the stony path in 40 degree heat, resting in patches of shade or ruined doorways, almost deafened by cicadas, and dazed by the stupendous view below us. 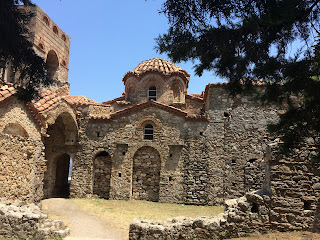 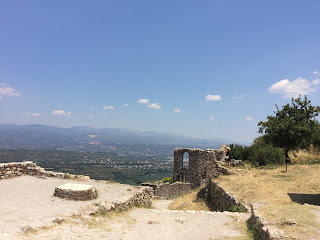 Then we fell into Dionisios’s waiting car, to be transported back up into the mountains and through the spectacular Langadha Pass to a small taverna on the far side, where the forest enclosed us, and the music of birds and waterfalls accompanied our lunch of bread, olives, chicken souvlaki, pork in lemon – oh god, the food!

Last Friday we got home. All praise to Bangor Minor Injuries staff who x-rayed and plastered me up in no time at all. Given the number of older women I’ve run into since – all with limbs in plaster – I’m planning to take up sling and splint design. There has to be something more attractive than frayed beige cotton and neck-throttling foam. I envisage emerald silk and indigo linen, with artful little loops for attaching keys and sunglasses, or the odd pocket to hold your purse, or possibly a G+T.

‘Injuries-R-Us’ – I can see it already: I'm going to be the Dior of damaged limbs, the Armani of the accident-prone...and it has to be more profitable than writing.