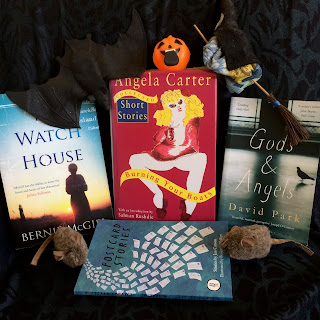 After Bernie McGill's The Watch House (go and buy it NOW and if possible take it to Rathlin Island and read it there) the next book in the pile was A Card From Angela Carter by Susannah Clapp. I don't know where I got it - I buy books every week, friends and family lend or give them to me, and by the time I get round to reading them, their origins are long forgotten. (This can be helpful if you've got your eye on any of my books: all you need to do is check there's no inscription, and say 'This isn't the copy I lent you a couple of years ago is it?' I'll probably apologise profusely for not returning it.)

Anyway, to get back to Angela Carter. It was top of the heap of twenty-odd books I'm planning to read soon. There are five times as many lying around that I'm planning to read if I live long enough.
It's small (103 pages) beautifully produced (Bloomsbury) and it's a captivating portrait of a writer interspersed with the postcards and messages Carter sent over several years to Clapp, who was her friend and literary executor. 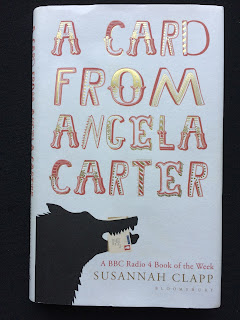 I fell in love with Angela Carter when I first read The Bloody Chamber, that fabulously lush and sinister retelling of old fairy tales. Then I read Nights at the Circus and Wise Children, but what I most admire was her glorious, fierce refusal to be anyone but herself. She was, in her own words, 'a kind of phoenix, a fabulous beast...an outlandish jewel' - outspoken, political, a fearless and unfettered writer. You read Angela Carter for inspiration, provocation, and for wild, flamboyant flights of fantasy, not literary restraint.

I have a soft spot for small, beautifully produced books - preferably short, illustrated and unusual. Step forward The Emma Press. (https://theemmapress.com/) I only discovered them when I bought a copy of Jan Carson's Postcard Stories. And I was thinking about Jan the other morning because I'd seen on Facebook that she was celebrating Miracle Day - the day her lost laptop (with all her work on it) was returned intact. What a happy note on which to start my own day, I thought - who knows, perhaps a miracle would be waiting for me too? Then I turned on my laptop and found all my desktop files missing. Nothing. Even Dropbox was empty.

Professor Gloom held out little hope that they could be recovered. Still, he has access to the Great Wizard of Queens (I can't tell you his name but he has a closely-guarded office somewhere in the labyrinthine depths of the University) so he departed with my laptop, leaving me to contemplate the random cruelties of fate.

And you know what? I had a wonderfully peaceful and creative day. I sat at my desk with paper and pen and felt a Zen-like serenity. Yes, I thought about the years and years of work that had gone into my latest book, but I also realised that the chances of anyone ever publishing it were so slight that I should probably be grateful to be spared the exhausting effort required these days to hook an agent, interest a publisher and get your book noticed, talked about, talked up, sold... There are several reasons why I like short books and short stories - and I recommend the one I'm reading at the moment, by the way: David Park's 'Gods and Angels', which is beautifully written and somehow manages to be both understated and compelling at the same time. Apart from the fact that small books are easier to carry around, I've never managed to produce more than 50,000 words myself so naturally I look on them with favour. But the main thing is that I'm 69 and my stamina is diminishing. And before anyone tells me today's 69 is the new 49, no it's bloody not: it might be the new trying-to-stay-49 but that's a different matter. The plain truth is that when you're pushing 70, you get tired. You ache, you twinge, you lose concentration and patience, and occasionally you behave like a cantankerous old bat.

But even cantankerous old bats can acknowledge miracles. The Great Wizard (may he live forever) fixed my laptop and recovered my files. And a day away from the reproachful wails of unfinished manuscripts (like so many half-born children) never mind the twitter and gibber and racket of social media, gave me the breathing space I needed to work out what it was that I wanted to write next. I also practised my Greek, and went out to buy my Hallowe'en outfit. And if you're a friend or relation of one of the little trick-or-treaters who covered our door last year with something that wouldn't come off, which meant it had to be repainted, please tell them I'm very sorry we were out, and therefore unable to give them any sweets. Not that they want sweets, or so I'm told: it's only money these days - and some of them don't even bother with the outfit, they just pull their hoodies up....but don't worry, I'm ready for them this year. I've got my gashed throat transfer, my glowing eyeballs and my fangs. And at the first ring of the doorbell I'm going to erupt out of here like a fiend from Hell, howling and screeching and brandishing my broomstick as I chase the little hellions down the drive.

I hope Angela Carter would approve.