I had a wonderful end to 2019: a visit from my sister Cathy (a great excuse for celebrations) followed by a quick trip home to see my sorely-missed Johannesburg family (and celebrate South Africa's rugby World Cup win - did I mention that before?). Then there was the birth of little grandson Cian (more celebrations, plus a flying visit from Uncle Dan to see the new arrival) and we finished up with a family Christmas. On Christmas Eve the house was full: two daughters and their husbands, two delectable little grandsons, and Cousin Emily from Istanbul in the attic. (I don't think she minded: it was the only peaceful spot in the house. Next year, when we expect our Greek family, I might just move up there myself.) We also wore masks for Christmas Eve dinner. Please don't ask why, but I think it might become a tradition.

So, it was a very happy Christmas, but it's been pretty much down-hill ever since. Brexit, Australian wildfires, floods, earthquakes - never mind Dry January - and now we've got everyone being hysterical about coronavirus. I should point out that I don't actually do dry January myself: it seems to me that you have to be truly masochistic to deprive yourself of any comfort available in January (which is a hideous month at the best of times) and it was only a bottle of Thorne & Daughters Wanderer's Heart Cape Red that got me through the night of Brexit. As for the virus, far more people die each day from TB, malaria, road accidents and ordinary flu, and to be perfectly honest I've reached the age when being carried off by flu seems infinitely preferable to a lingering death from dementia, cancer, heart disease, whatever.

This could be why I was so taken with an item I heard on the radio the other day. A member of the Ache tribe in Paraguay was reminiscing about his long-ago position as official bumper-off of no-longer-useful old women. When you were too old to even cook or baby-sit, he paid you a visit with an axe and bonked you over the head. At least it was quick. (Useless old men were just told to push off into the jungle and not come back.)

I sometimes think it's about time a literary equivalent of the Ache guy came and knocked me over my creative head. I've been writing all my life. Apart from a bit of journalism, the odd short story, and the little books I draw and write for my family to mark various occasions, my literary output totals 1 picture book (published) 1 children's novel (not published but a few copies printed up for family and friends) and 2 adult novels (1 published, 1 languishing). I'm half-way though a third novel but in some ways it's harder now, because I know I'm writing only for myself. I'm 71. That's the Ache equivalent of no longer useful, because let's be honest, even if I wasn't old, white and middle-class, even if a reckless publisher decided to take a chance on me, I wouldn't have either the stamina or the inclination to turn up at libraries, readings, festivals, workshops and the hundred and one other things that authors are expected to do these days to sell their books.

So why do I bother? Because I might just as well try to stop talking. You see the problem. And every so often, someone is kind enough to tell you that they like something you've written. Step forward the great-nephew (a boy of extraordinary intelligence and taste) who face-timed me from Cape Town to tell me that Moon's Travelling Circus was - and I quote - 'one of the best books I have EVER read'!! And this from a 12 year-old bookworm. Excuse me while I take a moment to compose myself. 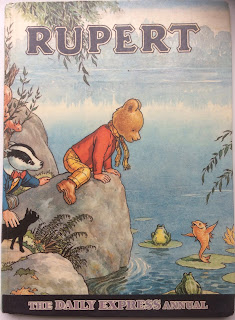 And speaking of books, I'm currently reading the 5th of Anne Zouroudi's Greek detective novels, The Feast of Artemis. There's only one more after this (The Gifts of Poseidon: I had to get it through World of Books, because she's out of print already) and I'm having to steel myself against the prospect of a world without Hermes Diaktoros. Luckily I still have several Christmas books waiting to console me...not to mention the Oldie subscription given to me by Gloom. Oh the joy of reading the rants of other unrepentant old reactionaries! And there's a paean of praise to Rupert Bear in this month's Oldie. He's even older than I am - 100 this year.

Described by Giles Brandreth as 'decent, heroic and endearing' in a world ' both bizarre and wonderfully reassuring' Rupert's adventures were never short of extraordinary characters and encounters; there was drama and danger and fantastic adventure, but, as Brandreth says, they were never frightening.

Other seasonal reading included Jo Baker's 'A Country Road, A Tree' (based on Beckett's wartime years in France) Maggie O'Farrell's inspirational 'I am I am I am' and John le Carre's 'Agent Running in the Field'. You can rarely go wrong with le Carre. And Lee Langley. I first read her novel 'Persistent Rumours' decades ago. I loved it, but somehow didn't read any others until I picked up two of her books in a charity shop the other day. 'Changes of Address', a child's eye view of a precarious life in India in the 40's with a shocker of a mother, reminded me why I liked her so much. She is a wonderfully evocative writer. 'Distant Music' is next.

There have been a few movies too, to distract us from impending doom: The Irishman (greatly enjoyed over 2 nights - I had mild concussion at the time and the whole three hours at once might have done for me) The Two Popes (highly recommended) and Frozen 2 (don't ask - I'm  probably the only person on the planet who was glad when the snowman melted. Unfortunately he reconstituted himself. And while I'm on the subject, when did Disney start getting all dark and heavy? For pity's sake, isn't real life quite bad enough for children already? Disney should take a lesson from Rupert.) We also went to see Little Women (Gloom loved it, I was less enchanted - great acting, but the sugary coating set my teeth on edge) and The Personal History of David Copperfield, which I loved. A brilliant, exuberant affair, with some stunning performances, and absolutely true to the spirit of Dickens, if not to the original version.

Storm Ciara is now showing signs of departing, but the ground is still covered in snow and ice, and Denis is waiting in the wings. A good excuse, along with a stuffy head, to stay inside, read, finish a Christmas jigsaw - and write. But wait a minute, there's someone downstairs, knocking at the door. Funny, he's got a vaguely South American look, and he seems to be hiding some sort of long-handled implement behind his back.... I think it might be safer to keep the door locked after all, and open another bottle of Wanderer's Heart instead...