This is the 40th Losing the Plot blog, which means I'm over the hump of 39 - always my least lucky number. I learned the 13 times table early on, so as never to close a book on an unlucky page, but for some reason 3 times 13 has always seemed particularly ill-starred. Apart from that, I'm not really superstitious, although one magpie is never a good sign, and of course I always touch all four sides of our house before I go on a journey, just to be sure of coming home...

This last one definitely works because once again I'm safely back from the other side of the world, despite losing passport, tickets, boarding passes AND luggage, and slipping in the shower and cracking my head. And no, it wasn't the result of too much celebration. My son and daughter-in-law were away for the night and the two grannies were baby-sitting with exemplary diligence and sobriety. Also, the wine cellar is outside the house and there was such a spectacular electrical storm raging that I was too scared to venture out.

Apart from that, and the odd domestic disaster (an over-adventurous small person crashing through a top drawer and a dash to hospital with an agonised adult - gall bladder, fortunately, not an exploded appendix) it was magic. Beautiful weather, my children and delectable, inexhaustible, small grandchildren - and their equally delightful and inexhaustible Greek family - and food and wine to die for. It's always an emotional reunion but this year was extraordinary because I arrived in Johannesburg at half-time in the England-South Africa final of the rugby World Cup. In Dan and Dimitra's house there were flags, Springbok shirts, a green ribbon on Stavros the Terrible (who isn't really terrible at all, unless he suspects you're up to no good...) and tears and champagne when South Africa won.

It's hard to explain to non-South Africans just what that victory meant. Until now, most South Africans had as much interest in rugby as they have in Patagonian potholes, but by the time I got to O R Tambo, the airport was a sea of Springbok rugby jerseys and the entire nation was glued to a screen. And when the final whistle blew, they exploded with pride and joy.

This is a country so badly in need of anything that can bring its diverse people together and help to heal the fractured past. Of course, sticking it to the English has always had a cheering effect on other nations (sorry Gloom, but it's true) but this was entirely different.The South African rugby team - which was for so long an all-white affair - is now under the inspirational captaincy of Siya Kolisi, and for the first time in its history properly reflects the whole rainbow nation. It might be a little unrealistic to expect the next grandchild (Councillor Kate's baby, due any minute) to  be named after all the Springbok heroes -  and we don't actually know what sex this child is (although I did see 3 magpies this morning) - but I have to say, Siya sounds like a pretty good choice to me. 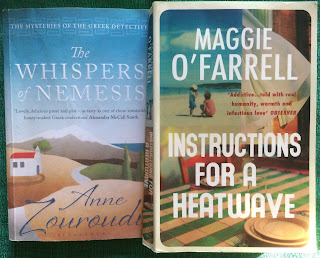 Flying out from one fractured society to another, I was reading Maggie O'Farrell's 'Instructions for a Heatwave'. She is brilliant on fractured families, and this particular family, the Riordans, are so maddening and entertaining that I almost enjoyed the 11-hr flight. On the return trip I read 'The Whispers of Nemesis' by Anne Zouroudi. She's new to me, so it was my first encounter with her detective, Hermes Diaktoros. Here's what the Guardian said about him: 'Diaktoros is a delight. Half Poirot, half deus ex machina, but far more earth-bound than his first name suggests, the portly detective has an other worldly, Marlowesque incorruptibility as he waddles through the mean olive groves.' Couldn't have put it better myself.

I woke yesterday morning at 5.30 to a frosty moon still high in the sky and Clementina purring in my ear. In Johannesburg it was the hadedas that woke me. They're the noisiest birds in Africa - their raucous shrieks could wake the dead - and for reasons best known to themselves, they start screeching overhead at 4am - but it's a sound that takes me straight back to childhood, and I miss it, along with all my much-loved family. The time went far too quickly, as it always does. I'll be back, of course,  but just to be sure, I touched all 4 walls before I left.