TARTS, TOMBSTONES AND TAKING A STAND


We've been celebrating the arrival of a new baby in the family - which is all I'm going to tell you because his parents are intensely private (in marked contrast to the rest of the family) - but it was for this reason that Professor Gloom and I were in London a couple of weeks ago, in Highgate, which is one of the parts of the city I like most, even though it's murder on the legs. We stayed in an Airbnb with lovely people, a fabulous garden and a literary cat called Huxley.

It was a stone's throw from Highgate station, so there was a steep climb up to the village for breakfast, but once there, it was food heaven. Coffee in little bowls, croissants to die for and fresh fruit salad at Le Pain Quotidien (or eggs and crispy prosciutto for those who like eggs) versus equally delicious coffee in cups at Gail's, and the most seductive spread of cakes I've ever seen. Choosing between them was impossible, so we alternated. In the space of 10 days I sampled plain and almond croissants, madeleines, muffins, and custard brioches. I ate pain au chocolat and blueberry tartlets (Kelly McCaughrain eat your heart out) not to mention lemon polenta cake, pancakes and scones. One morning in a fit of guilt I ordered a penitential bowl of porridge, but even that came swimming in cream and honey. It was all I could do not to lick the plates.

Highgate also has a lovely bookshop. The woman on duty at the till most days was reading Circe by Madeline Miller - she said it was even better than Song of Achilles, which I loved, so I'm looking forward to seeing if I agree with her. Of course, the trouble with London - and Highgate in particular - is that it's all very well if you can afford to sit around eating cake for a few days, but for every well-heeled resident discussing a bathroom makeover with her decorator over avocado toast, there are hundreds of others working all the hours of the day to afford the rent on a miserable shared flat, or room, and not much cash left over for books, or cake. That said, Hampstead Heath is free and not far off, and there's Highgate Wood and Waterlow Park to wander through, as well as the gardens at Kenwood. And last but not least, there's glorious Highgate Cemetery.

Now who would ever think that a cemetery could be delightful? Gloom had never been there and accompanied me without enthusiasm, but even he was bowled over. It helped that we were having one of those golden summer weeks when even the most overgrown and forgotten sections of the graveyard were speckled with sun, and the roar and rush of London was masked by whispering leaves and insects. Highgate is a non-denominational garden cemetery, and there is something about it that is so deeply peaceful that it can restore the most worn-out soul. Apart from there being no sound of lapping water (unless it's dripping rain) you could be in Innisfree.

As to the actual graves, they range from sentimental, brutal, 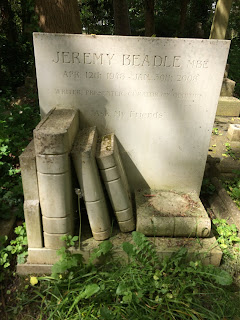 touching or imposing, to the outrageously funny and downright peculiar. I was keeping an eye out for writers. Amongst others, we found Douglas Adams, with his jar full of pens, George Eliot, Jeremy Beadle, literary agent Pat Kavanagh, and of course, Karl Marx. His fairly hideous monument, as opposed to the original simple gravestone, is opposite the grave of Paul Foot, and all around him lie a motley collection of Marxist theorists, political activists and socialist commentators. It's the only section of the cemetery that feels turbulent: I imagine a lot of furious ghostly argument going on after dark.

I have several favourite graves, including the one with the faithful dog, Emperor, the memorial to a dead pianist, and Patrick Caulfield's 'DEAD'. What more do you need to say, really?

That particular day there were very few tourists apart from ourselves, and although no animals are allowed we met a black cat who obviously hadn't read the notice. Or possibly he was a reincarnated communist, and didn't hold with property being private. The other thing that happened was that I kept misreading things, so that 'dearly beloved' became 'nearly beloved'. (A bit like the subtitles for the hard-of-hearing on the BBC: last week's news said that Jeffrey Donaldson was given a 'warm Malcolm' at Queens. I think they meant 'welcome' but 'Malcolm' opens up so many more interesting possibilities.) Anyway, Highgate is the only cemetery I wouldn't mind being buried in. My preference has always been to go up in smoke (if not out with a bang) but who could object to the surroundings, and the company, at Highgate?

Back home I've been lying low, and missed a lot of things I'd planned to attend, but I did get to a rally with Councillor Kate, to press the case for change in the north now that the rest of Ireland has voted to repeal the 8th amendment - to their everlasting credit. Gloom is never happy when we're off protesting: he thinks he will be called upon to bail us out, but I keep telling him the world has changed. Protests are sedate affairs these days, not a Molotov cocktail in sight, just a bit of chanting and cheering and banner-waving. I particularly liked the placard that read 'The DUP - disappointing us since 1971'.


There weren't an
awful lot of people there - it was the tail end of a hot bank holiday Monday -
but there was a great
feeling of cheerful determination that sooner, rather than later, Northern Ireland's shameful abortion laws will be overturned. In the mean time, we still have a bunch of backward, bigoted dinosaurs to deal with, so those of us who hope to see a fairer, juster, day need to get out there and make our voices heard. To which end I am now off to join Alliance for Choice at the Processions 2018 march. You're never too old for a demo.