Professor Gloom has trouble getting out of bed - well, he would have if I didn't yank the duvet off while simultaneously yelling GOOD Morning! in his ear. This is usually enough; there are harsher methods, involving iced water, cattle prods, etc, but one doesn't want to use them unnecessarily.
The other morning, I had no sooner whipped off the covers than there was a horrendous crashing noise and a large section of our ceiling fell down. I've never seen a man get out of bed faster.

The amazing thing was that once the dust cleared enough for us to start sifting through the rubble and plaster, we discovered - grimy but intact - my phone, as well as a still-functioning radio and hair-dryer, and three bottles of perfume whose combined cost suggests that perfume manufacturing is a good line to be in. All the framed photos were smashed to smithereens and the chest of drawers that took the direct hit looks a bit distressed, but what's really worrying is what's been exposed. I know this is an old house, but wattle and daub? 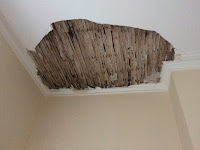 Still, it could have been worse. We could have been dead: some of those chunks of plaster were jagged and heavier than bricks. Clementina could have been dead: she was sharpening her claws on the carpet at the time but used up one of her nine lives to leg it a split second before the avalanche engulfed her. (If there is ever an earthquake in Holywood, or a tidal wave or hurricane, Professor Gloom and I will disappear down a chasm or be washed out to sea,
while Clementina will be found clinging to a branch, looking 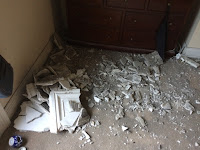 misleadingly sweet and helpless, and be rescued by some other sucker. Take my word for it.)

Anyway, this particular mishap reminded me of the incident in J.P.Donleavy's The Ginger Man when the appalling Sebastian Dangerfield's wife goes crashing through the ceiling of the room below while sitting on the lavatory. I remember laughing like a drain. And there was an incident in my childhood when a friend of my brother's was dared to walk the attic beams and crashed through the ceiling to land beside my surprised mother who was having an afternoon nap on her bed.

For true, clutch-your-ribs, uproarious anarchy though, you need to turn to children's books. Roald Dahl, Pippi Longstocking, Kay Thompson's glorious Eloise who lives, and creates havoc, at the Plaza Hotel. But for me, scruffy head and shoulders above them all is William Brown: the best-intentioned, blithest and most lawless child that ever caused mayhem in the adult world. 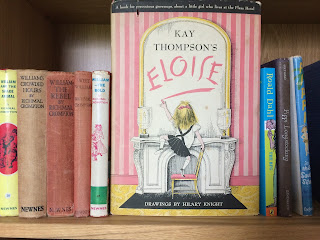 Richmal Crompton created William between the wars, in the gap between the clouds of horror building on the horizon; William cheered my father up, he cheered my children, he cheered me as a child, and he cheers me now. He even cheers Professor Gloom. So when the roof caves in or the future looks too grim to contemplate - which is seems to do quite a lot these days - you could do worse than spend an hour or two with William Brown.