Breakfast with Professor Gloom is a silent affair – on his part. I remark from time to time on the weather, a local outbreak of Plague, a meteorite hurtling towards us, but the only sure way to elicit a response is to say ‘Cheese’. From the instant softening of his expression, the unfurrowing of his corrugated brow, I know that ‘cheese’ has much the same effect on him as ‘madeleine’ had on Proust. God knows why, but there you are.

There’s a lot of food in literature – well, there is in the books I like. From Enid Blyton picnics (potted meat and ginger beer!) to Wodehouse breakfasts of kedgeree and kippers, and the glorious, gluttonous feasts of hobbits and dwarves. Breakfast on Pluto, Dinner at the Homesick Restaurant, Babette’s Feast, Tea at Gunter’s…it’s the titles that attract me first. But if you want to read about food, you must read M.F.K. Fisher. I am the happy owner of a copy of The Art of Eating, a book so stuffed with stories, recipes, quotations and wonderful writing that it is an everlasting meal in itself. Her titles alone will tell you at once that you are in for a treat: ‘Consider the Oyster’, ‘The Gastronomical Me’ and my all-time favourite, ‘How to Cook a Wolf’. 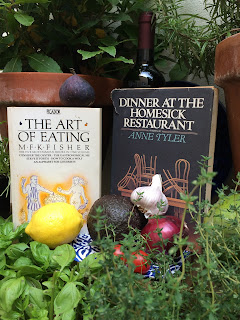 This last was published in 1942, in a period of wartime shortage when you might have been glad of the odd slice of wolf, and is prefaced with a quote from C.P.S. Gilman which should be written above every writer's desk:
There’s a whining at the threshold,
There’s a scratching at the floor.
To work! To work! In Heaven’s name!
The wolf is at the door.

Fisher travelled the world, married several times, and had an inexhaustible appetite for life, love and food. This is from her Alphabet For Gourmets:

‘As for dining-in-love, I think of a lunch at the Lafayette in New York, in the front café with the glass pushed back and the May air flowing almost visibly over the marble tabletops….a bottle of Louis Martini’s Folle Blanche and moules-more-or-less-marinieres…then a walk in new black-heeled shoes with white stitching on them beside a man I had just met and a week later was to marry, in spite of my obdurate resolve never to marry again…’ Now tell me you do not want to read her.

I finished writing a novel this week - and felt that rare euphoria that comes with the moment when you realise that it's finally done. Unfortunately Professor Gloom wasn't here to celebrate: he had departed with the air of a man setting out on a doomed but vital mission to a far-flung, dangerous land (the Bridge Club) but I poured myself a large gin and tonic and Clementina kindly consented to sit on my lap for a full five minutes before she bit me, and wandered off to some appointment of her own in the garden. So I had another gin and tonic.

Now back to work. Finishing a novel only means you have to go back to the beginning: to revise, to prune, to enrich, to rewrite, and maybe in a month or two to send off those first letters and sample chapters, like so many messages in bottles...

To work! To work! The wolf at my particular door is Time.

Email ThisBlogThis!Share to TwitterShare to FacebookShare to Pinterest
Labels: Blyton, Food in literature, How To Cook A Wolf, M.F.K.Fisher, The Art of Eating, Wodehouse