A postcard of those Belfast landmarks, Samson and Goliath, came through my letterbox a couple of weeks ago. It informed me of the successful completion of a short film, and thanked me for being one of the backers. The film in question is a love story set in Belfast against the background of the Good Friday agreement, with the name of our adored Clementina in the credits, because, the day after she died I happened to read that the young filmmakers needed funding, and it seemed a suitable way to honour her. (She was the sort of cat who would have enjoyed seeing her name in lights.) And on the same day that this card arrived (with its charming hand-written message: 'I cannot really describe how happy I am to deliver this card to you! Thank you for believing in our project...') I had news of a very different kind. One of my closest friends had suffered a sudden, catastrophic brain haemorrhage. So here was one journey at its start and another at its end...
When I moved from Belfast to Holywood 14 years ago, I was a single woman with a cat, and upstairs lived another single woman with a cat. It was friendship at first sight: a bond which quickly grew to include my numerous friends and far-flung family. She even gave up her own bed for my visitors and slept on her sofa when space was needed, and no celebration was complete without her: Christmas, birthdays, weddings, Disaster Parties (for women only, and so called because most women of a certain age have disasters to contend with: divorce, widowhood, loneliness, badly-paid jobs, delinquent children... marriage) She was the kindest and most generous of women, with a wide circle of friends and a great zest for life; she was Auntie G&T to all my children, until the day that, for no particular reason, she decided to give up drink, whereupon she became Auntie TT. 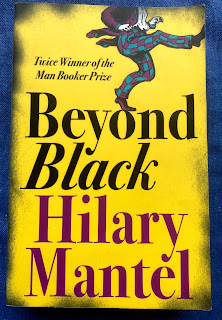 Oddly enough, on the day that she hovered between life and death, I was in the tunnel of an MRI machine - an experience I usually hate - but this time it didn't feel so bad because she seemed to be there with me. Each in our separate tunnels, like two tube trains, going in different directions but lighting each other's darkness briefly as they pass. As we lit each other's lives. Afterwards, I went to see her with my daughter, but she was no longer really there, and I'm grateful she never regained consciousness: she would have faced a life of damage or dependency, which she would have hated. And if all this sounds very solemn, it's not meant to be. Grief is all-consuming, often selfish, and always intensely personal. With the best of intentions, people say 'I know how you feel'. No, they don't. No-one can ever know exactly how another person feels, and to say that you do can sometimes feel like an intrusion. But the older I get, the easier the acceptance that death comes for us all, and the more I value the saving grace of humour - The Oldie magazine being a favourite, deeply-unsentimental, and bracing source. (The cartoon on the left is one of my favourites.)
As for books on death and dying, there are some wonderfully funny novels (George Saunders' unforgettable Lincoln in the Bardo, Hilary Mantel's Beyond Black, Waugh's The Loved One) and others that are deeply moving without being in any way sentimental. Grief is the Thing with Feathers springs to mind. And then there's Goodbye Mog, for children, which being written by the sainted Judith Kerr, is poignant, wise and funny, and the best book I know about the death of a much-loved pet. For many, of course, poetry is the greatest solace. I may have written before that one of my favourites is by Kahlil Gibran and contains the line 'For what is it to die but to stand naked in the wind, and to melt into the sun?' But people who are grieving often find it hard to read at all, and must come back to it in stages.
My friend's attitude to death was very matter-of-fact. She once said to me - after a visit to the dentist - that if she ever found herself face to face with some deity in the Afterlife, she would have several bones to pick, starting with the poor design of teeth. The name of the Belfast film, by the way, is Another Day in '98 and I greatly look forward to seeing it. In the mean time, I will think of my departed friend, now keeping company with the ever-growing collection of those whose lives I remember with gratitude, with love and laughter (including 18 cats) and I will derive great pleasure from the idea of her confronting the Almighty, and giving off about teeth...
*

There is a postscript to this: two weeks to the day after her death, her much-loved cat - the one that moved with me to Holywood all those years ago but who moved upstairs (with alacrity) when I moved out - was judged too infirm and elderly, at nearly 20, to withstand any further changes. So our lovely local vet came to the house to put her to sleep, so gently, kindly and peacefully that we could not have asked for a better journey's end.

If only we could ask her to do the same for us one day.

Email ThisBlogThis!Share to TwitterShare to FacebookShare to Pinterest
Labels: Another Day in '98, Beyond Black, The Oldie