I went to my first undergraduate lecture since my misspent youth the other day. It was the very last one of Professor Gloom's illustrious career and as I'd never heard him deliver a lecture to other people (he frequently lectures me, which is an unrewarding exercise for all concerned) I thought I'd tag along.

The lecture theatre was full of students, which surprised me, given that the subject was a branch of Physics so obscure that only three people on the planet understand it. But the bigger surprise was Professor Gloom himself. I knew he was clever, witty, grumpy and kind (an irresistible combination as far as I'm concerned) but I had no idea how good he was as a lecturer.

As Councillor Kate, who's very fond of her stepfather and tagged along with me, later said, he was his typically humble, intelligent and good-natured self. He also shelled out the last quid ever to a student who proved him wrong about something. He's been doing this for years, apparently, and so far it hasn't bankrupted him. If he extended the practice to paying me when I prove him wrong - not about Physics, obviously, but ordinary things like where he left the car, or the use of 'fewer' rather than 'less', it would be a lot more expensive...

Anyway, it was all amazingly entertaining, if entirely incomprehensible - apart from the bits about Jane Austen, Shakespeare and Thomas Wyatt. What? You didn't know they came into Advanced Physics, along with bosons and quarks? Well, that just shows how little you know.

He didn't tell anyone it was his last-ever lecture, and there was no-one there from the administration with a bottle of wine or bunch of flowers to say thank-you for 37 years of lectures (Queens doesn't go in for that sort of namby-pamby nonsense) but at the end there was prolonged applause from the students. They recognise a good thing when they see it, and good for them. 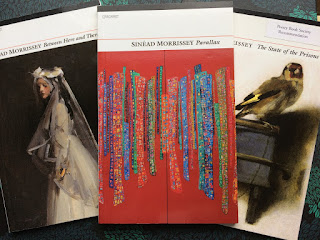 There'll be prolonged applause for Sinead Morrissey too, I shouldn't wonder, when she launches her 6th collection - On Balance - at Queens tonight.  I'm sorry I can't be there because Sinead is the woman who changed my mind about contemporary poetry. Until I met her I would have said I preferred my poets dead and consequently unable to pop out from behind a tree and inflict their latest offerings on me. (I have a searing memory of someone pursuing me round a park while reading something called 'When Will The Anguish End?' When indeed.)

Sinead is not only an extraordinary poet, she is also, like Professor Gloom, extraordinarily nice. Queens was lucky to have them both.
Posted by Helen Nicholl at 09:29