Northern Ireland went to the polls on Thursday, and I went to cast my vote for Alliance. I believe passionately in the non-sectarian, shared-future aims of Alliance. I've also got a soft spot for the Greens, and I applaud anyone who tries to put their views across in an unaggressive, dignified manner. (Why can't more people be like Stephen Farry?) Unfortunately confrontation is still the order of the day, and there have been times in the last week when I felt I would vote for anyone who didn't try to shout the opposition down. Couldn't we start a movement to  have politicians lined up for discussion with their mouths taped shut, the tape to be removed for an agreed time - one minute? two? - before the next question is asked?

The opposite of listening to our politicians badmouthing each other is to listen to the @UlsterOrchestra. They have two wonderful conductors at present: the glorious Rafael Payare (think Johnny Depp meets Groucho Marx meets Fred Astaire) whose rapport with the orchestra is tangible and whose movements are so mesmerising I'd watch him conduct an empty stage; and there is Jac van Steen. I have a natural affinity with Jac - I've got Dutch blood in my veins - and there is a warmth and honesty about him that allows you to settle back, secure in the knowledge that what you are going to hear will be worth hearing. (Unlike most of our politicians.) 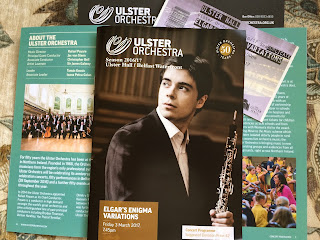 Friday's performance was definitely worth hearing. A young Spanish oboist, Ramon Ortega Quero, was deservedly cheered, but it was Elgar's Enigma Variations that raised the roof. Nimrod is the best-known - it was my father's favourite, we played it at his memorial service, and I can never hear it without thinking of him - but this performance was especially memorable. As Jac van Steen urged them on, the separate voices of the orchestra - strings, woodwind, brass, percussion - combined and soared together to produce a wonderful, powerful and soul-restoring end result.

I just wish our politicians were more like the Ulster Orchestra.
Posted by Helen Nicholl at 07:41